A Tribute to John Porter 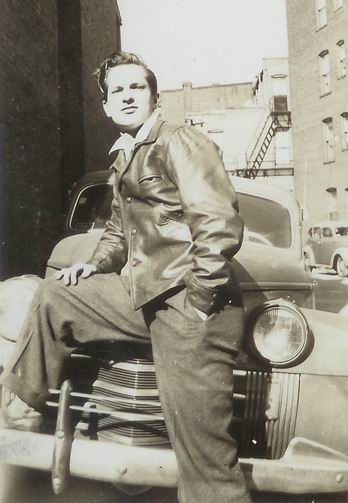 My father John Porter was a highly regarded auto mechanic, trained by

Ford and certified by the NIASE (now called ASE) in every category offered at the time. If it was a system on a car or truck, he was trained and certified in it, including automatic transmissions which were very complex even back then. He worked in the industry over 40 years. He was a humble man but there wasn’t anything he couldn't fix and I grew up in awe of his talents. He was the guy that the other mechanics would ask for help, and he was always generous with his time, especially with the younger guys. As a kid during the summer months I would occasionally go to work with him and sit on a stool nearby watching him work. Oddly enough I never got bored. I would get so immersed in what he was doing, and to this day I still remember some of his techniques. As soon as I was able to drive I landed a job at the Ford dealership after school as an apprentice working at the lift next to my dad.  I worked out of his tool box while starting my own tool collection.

As a kid growing up I spent a lot of time in the family garage at home, often pestering him with endless questions about a car he would be working on. He was a patient teacher, and I paid attention (and became an expert gasket scraper). As a young man I spent many hours turning wrenches on the family lawn mower, my minibike, dirt bikes, and ultimately my R80/7 which I bought new in 1978 (and still have today).

After high school I took a job as a motorcycle courier in Washington DC. Many of the couriers used BMW motorcycles, and I put my R80/7 to work. Courier work is hard on a bike, and routine maintenance and repairs became commonplace. I found the systems on the /7 were very automotive like, and quickly realized I had a talent for repairing BMW motorcycles.

In 1980 I stopped in at a well known BMW motorcycle business in Washington DC for some parts and noticed a help wanted sign hanging on the wall. I worked there for three years. In late 1983 I opened my own BMW motorcycle repair business in Maryland known as Bavarian Motorhaus. I invested heavily in factory special tools and equipment, and worked on countless BMW motorcycles over the next seven years including gearboxes and final drives that a Maryland dealer would send in because they weren't comfortable working on them (imagine that for a moment). I also did a fair amount of engine disassembly for Bob's Used Parts.

In late 1990, Bob Henig of Bob's Used Parts approached me about closing my doors to help him open a dealership. It took some negotiating but I liked Bob's vision and agreed to join forces with him. In early 1991 I moved my service operation in under his roof and Bob's BMW was born. It was hard work in the early years as I fixed bikes, answered phones, did the mail order bench work, hired and trained the new guys, and multitasked like mad. But I look back on that experience with gratitude as I was able to watch one of the nation’s best run dealerships blossom and grow over the next nine years.

In 2000, I may have been having a mid-life crisis and was growing tired of the hot humid summers in the mid-Atlantic area where I was born and raised. I had always loved California and decided to bite the bullet. It was a tough decision because Bob's was a great place to work, and my family was in the DC area, but I followed my dream and landed on the central coast of California. I worked as Service Manager for two very good dealerships in the area but ultimately decided to return to the hands-on experience of running my own motorcycle business. I moved my father to California and was able to care for him until  he passed away in November of 2004.

I learned a lot from Dad. The overriding theme of his many lessons is that no matter what you do for a living, you should always take pride in your work. That might sound cliché, but he was old school and impressed upon me the importance of attention to detail and how to proudly stamp your name in whatever you do for a living. I do this work because of the passion I have for the products, and the pleasure I derive from interacting with my customers. The principles and ideals imparted to me by my father are the foundation of my business today, and we’ve created a shop culture where these values are shared by every staff member. When I sell you a shock, or overhaul your BMW cylinder heads, or provide you with some of the world's best motorcycle products, you can count on us to employ the skill, integrity, and attention to detail handed down to me by the master.